Music was integral to the film and a huge inspiration while writing and producing the movie. 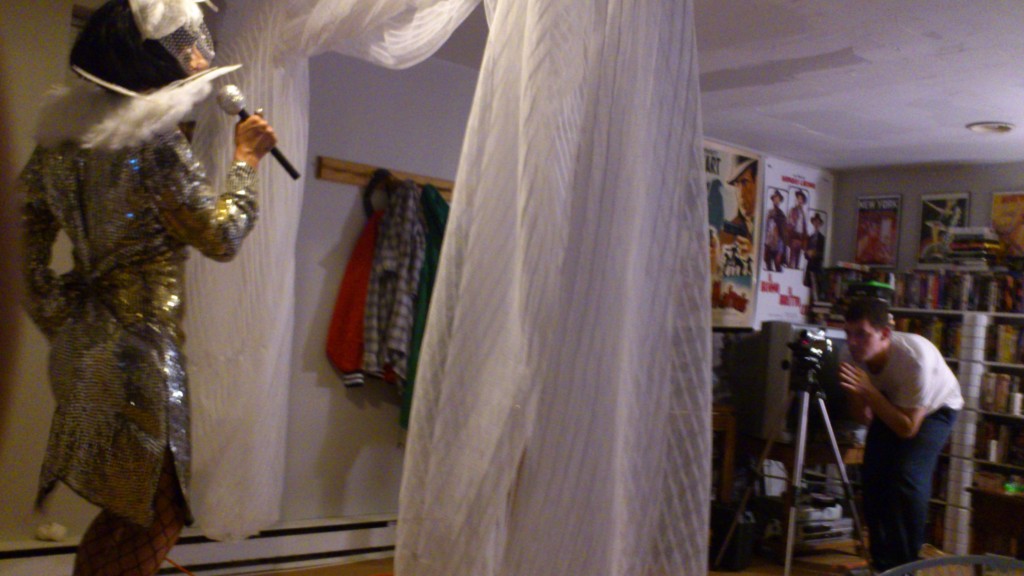 Being a non-actor, Brieann was a little nervous opening her shoot with Feathers’ nightclub performance but I knew I could afford to burn some tape to let her get comfortable and was sure there would be something I could use for cutaways if necessary so it wouldn’t be a total loss. 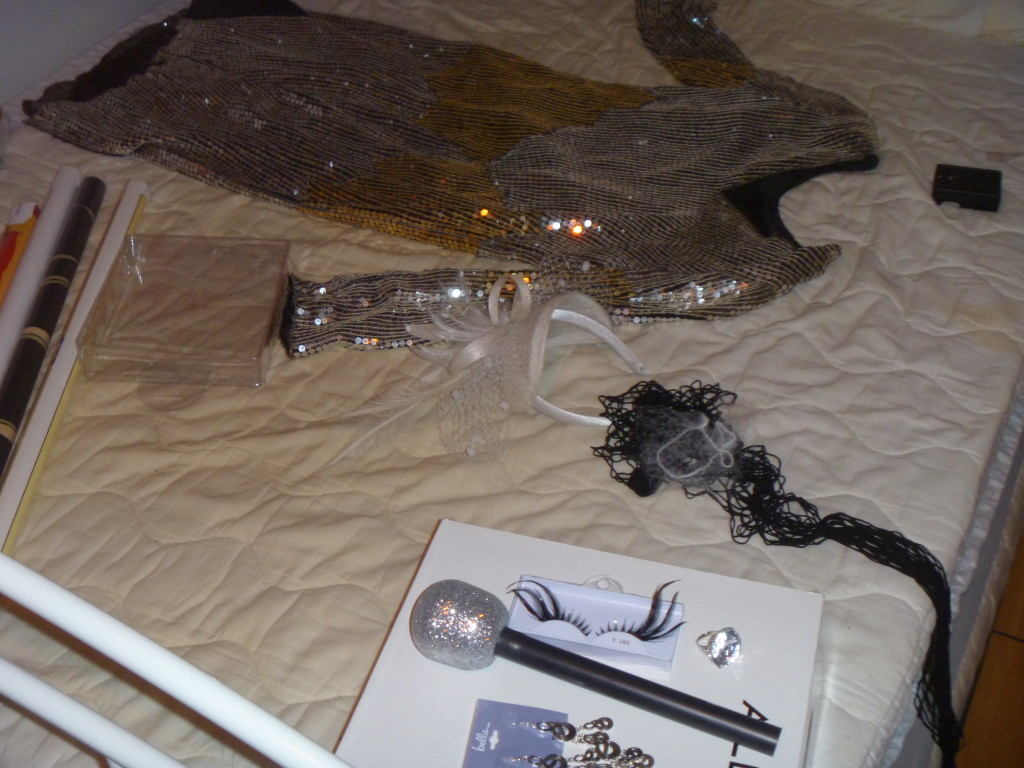 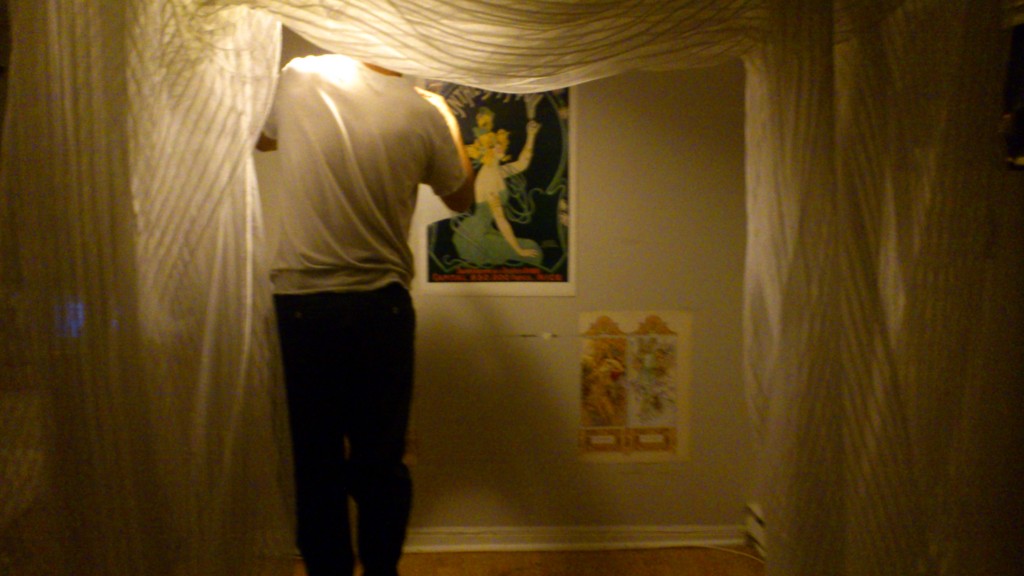 Brieann arrived after work and I made dinner while she suited up and did her makeup. Mike set the lights as I stirred tomato sauce. With my sister done in wardrobe, we sat down to break bread in a kitchen that was now dressed as The Underground’s main stage. I had shot a bunch of camera tests a few weeks earlier to see how my video camera would handle the city streets at night but this was the first time I’d ever shot on a set in a controlled environment and I will say, it’s pretty neat to be eating dinner on a movie set. 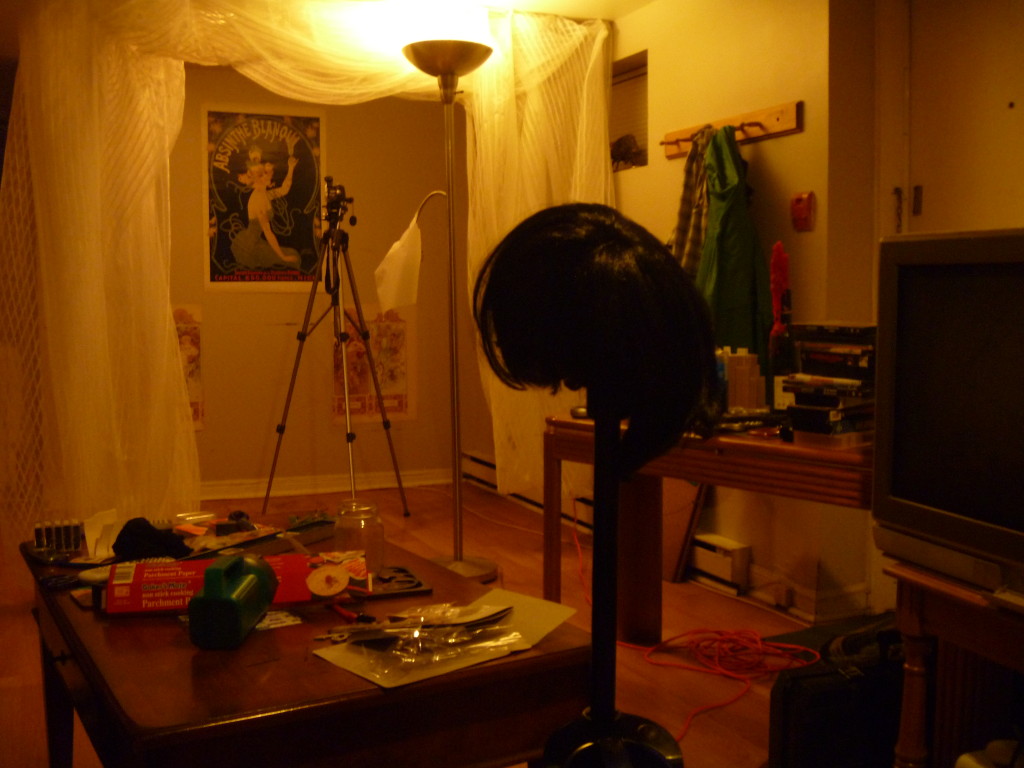 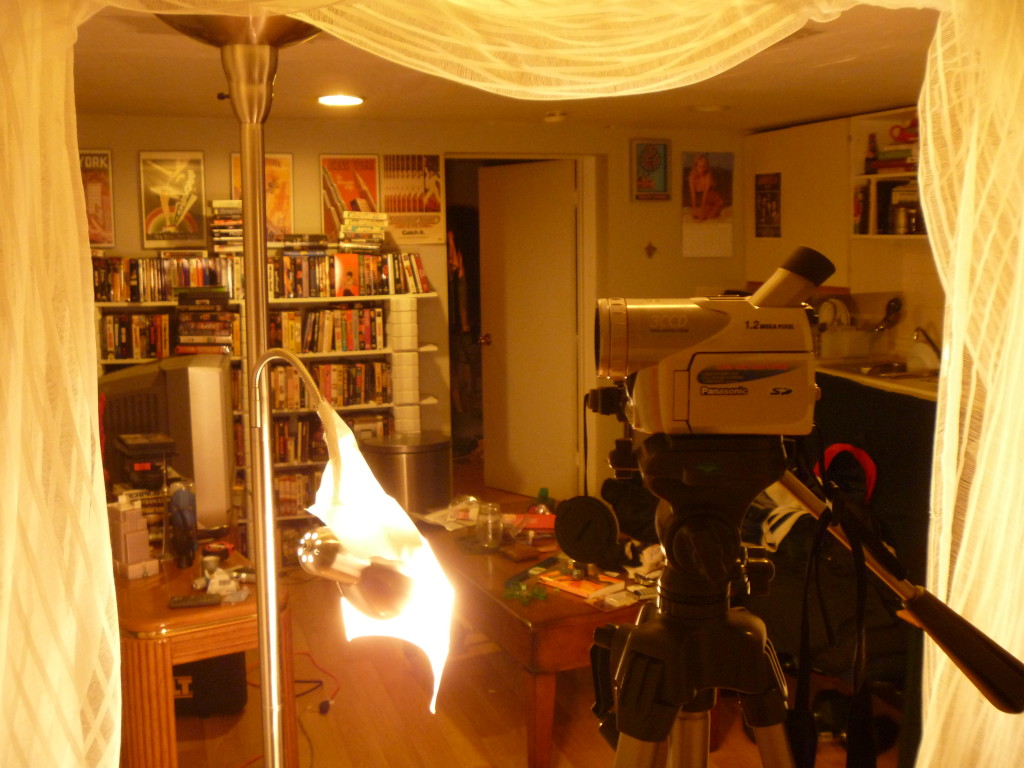 My sister never bothered to read the script the first time I gave it to her as she was busy tanning on the dock at the cottage so she read three pages and rolled over to even out her tan lines, never finishing the script in the process. I took the time at dinner to explain what we’d be shooting after dessert (I’m a chef by day so yes of course, there was dessert, naturally). I explained that there was nothing to worry about as I chose the club scene for her first shoot because it was essentially a lip sync performance. If Britney Spears can do it how hard can it be right? With dirty dishes in the sink it was time to roll. Mike cued the music. Brieann threw on the wig and threw back a glass of wine. I hit record and set the lights then left the room for Bee to rock the first take alone with the camera. To any film students or virgins reading this who may be working with non-actors as well, if you have the time on set, I would recommend getting your performers comfortable in front of the camera by letting them do a take or two alone, without any direction or extra eyes on them before proceeding with the actual blocking and shooting. I ended up letting her have two complete takes of the song (one medium shot, one medium close up) before I joined her on set watching from behind the camera and it made a huge difference when I reviewed the tapes later. She really started cooking after the third take and second glass of wine (surprise, surprise). 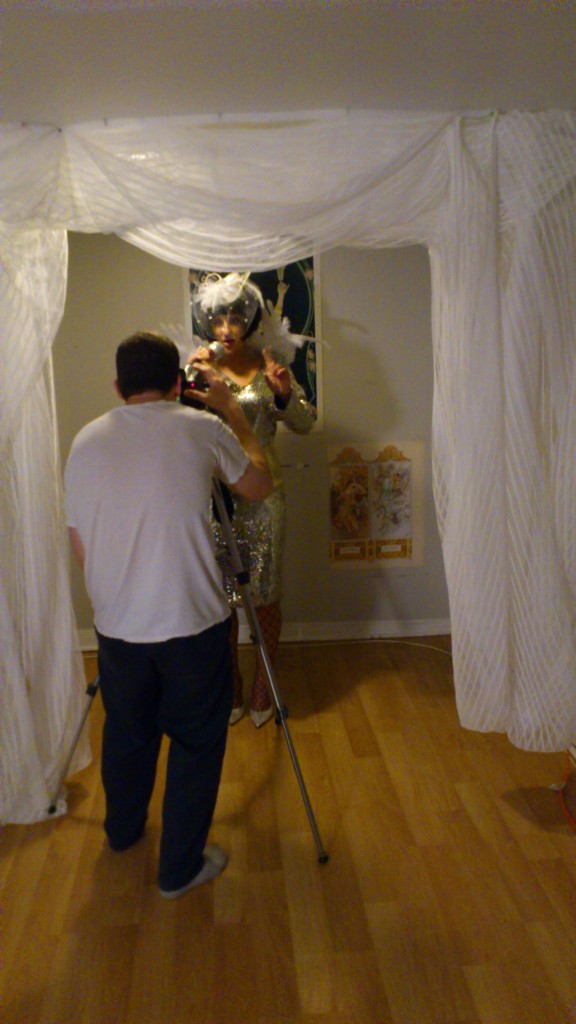 I chose the song “Out In The Streets” by The Shangri-las for a few reasons, one, I love love love those girls and that Mary Weiss is one far out chick, man. I also love the lo-fi sound of the early sixties garage recordings and thought it would be a good fit with the lo-fi recording I was doing with the movie. There’s something about the sound on those recordings that I fell in love with, also, I should note that my parents are baby boomers so I grew up with my Dad playing a ton of rock & roll from the early 50′s and 60′s on vinyl and listening to Saturday Night Oldies and a ton of oldies on AM radio as a kid so although this music isn’t from my generation, it still feels nostalgic for me. I also knew the ominous opening vocal provided a perfect amount of time to flash the opening titles of the picture and lastly, the song itself was a nice vocal compliment to Dutch walking the city streets in the opening sequence as well as encapsulating the whole essence of shooting the picture literally out in the streets.

Each song was chosen carefully in editing and there were many surprises along the way. I knew certain songs like the Shangri-Las stuff and most of the Wild Style stuff was going to be included because they were written into the script but after that it was open season. I had the radio on as I was waking up, I had my iPod shuffling’ hard on the way to work, music is always on at the restaurant I work at, back to the iPod on the way home from work, radio on while making dinner and shooting, back on the iPod when I went out into the night to shoot the city stuff.  Radio on quietly as I tried to get a couple hours sleep before getting up and doing it all over again.

Most song choices came pretty easily and some came out of nowhere. If I didn’t have a certain song in mind for  for a scene, I usually had an idea of the genre of music the scene would require. Like the scene between Double Dutch and Pearly Gate Nate for instance, Nate was based on Fab Five Freddy in the Wild Style movie (one of my all time faves) so originally I was going to use an old school track for the scene but while editing Hayter Street I wrote a spinoff story for Nate in which it turns out he is a gun runner so I just couldn’t get the Smif-N-Wessun song out of my head but laid both Schooly D’s “Gangster Boogie” and Boogie Down Productions “9mm Goes Bang” over the scene before going with “Bucktown” for the movie.

Other songs were completely accidental like the case with “Runway” by Snow. I always wanted to use Canadian artists on the soundtrack and wish I had used more, but Snow was never intended. I was cutting the scene between Eyes and Dutch in the alley and really had no clue what song I was going to use, I had a few Bollywood songs in mind as I figured it would go with the scenes of Dutch snooping around Little India and ”Dhinka Chika” was definitely the leader of the pack because I love the fast tempo of the song but I really had no idea which song I was going to use. After a long day at work I was getting off the subway and a homey in the TTC station was blasting “Informer” on his jam box and I thought “eureka”. I laid the song over the scene and it worked really well but I decided to give a listen to the whole album because I probably hand’t done so since like grade six. I’m glad I did because I rediscovered “Runway” and ended up liking it much more for the scene.

Music was also important to Mike’s first shoot on set. He had shot some camera tests in character as Double Dutch (some of which can be spotted in the opening of the film if you’re an eagle eye) but when it came time to shoot as The Strangers in the opening club scene, Mike jumped on the YouTubes and made a playlist to get in character as we cracked some beers and dressed the set. 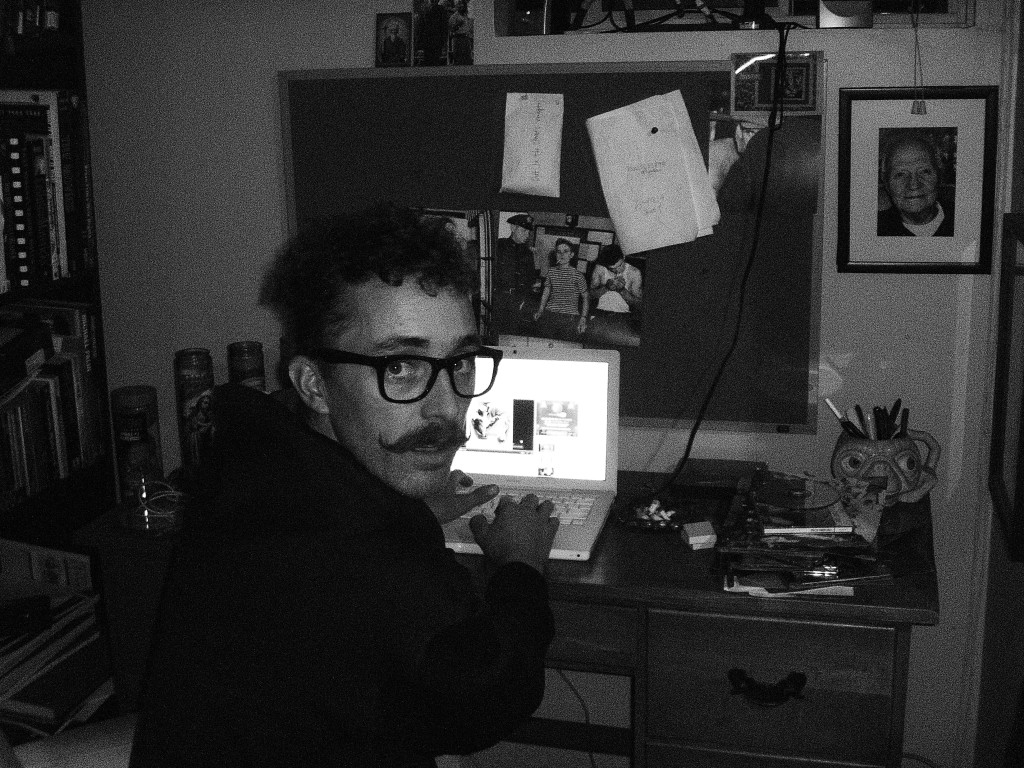 With Hayter Street being a silent movie I didn’t have to record sound obviously so music on set was a constant. From setting the mood for actors (a technique used by directors since the invention of cinema, it’s amazing how integral music was for silent productions), to passing the time while setting up, to listening to music CONSTANTLY while cutting the picture, whether it was inspiration or simply a temp track, I can’t imagine making this movie without being surrounded by glorious sounds day and night. Musicians, you make the world go round. Thank you. 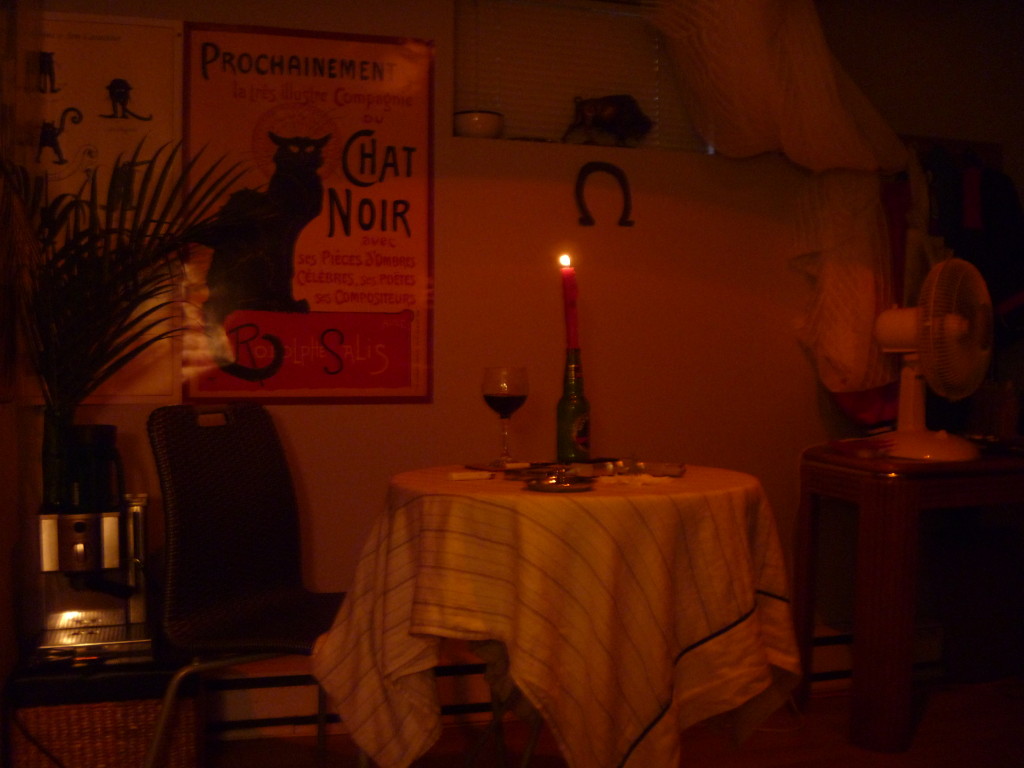 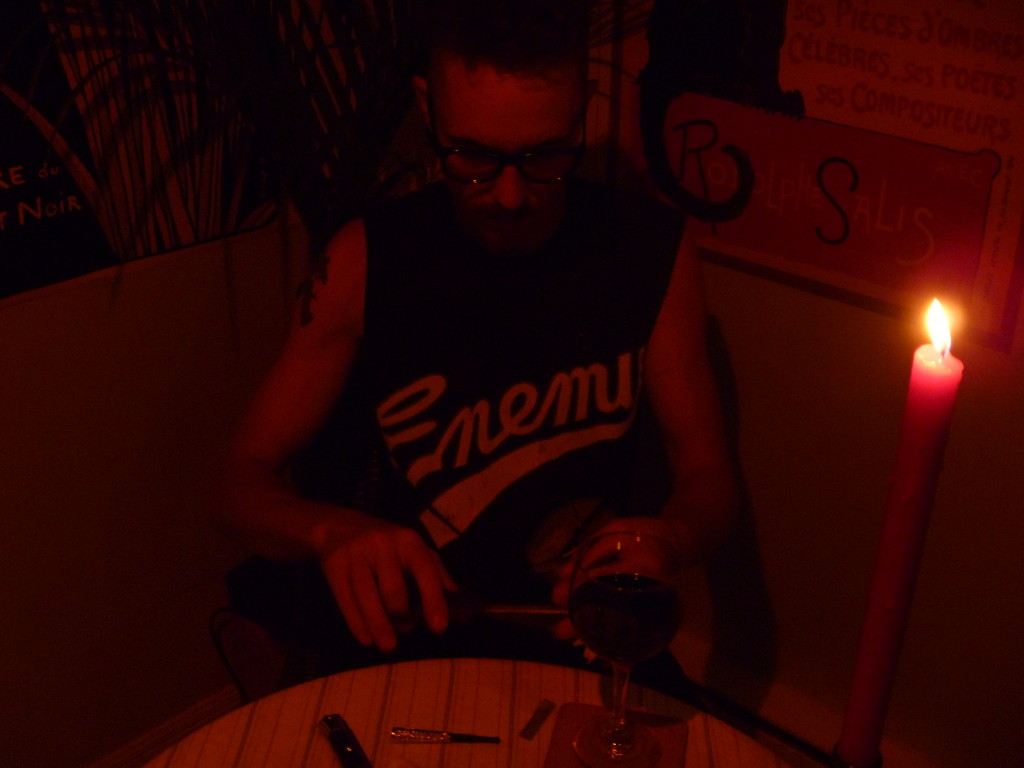 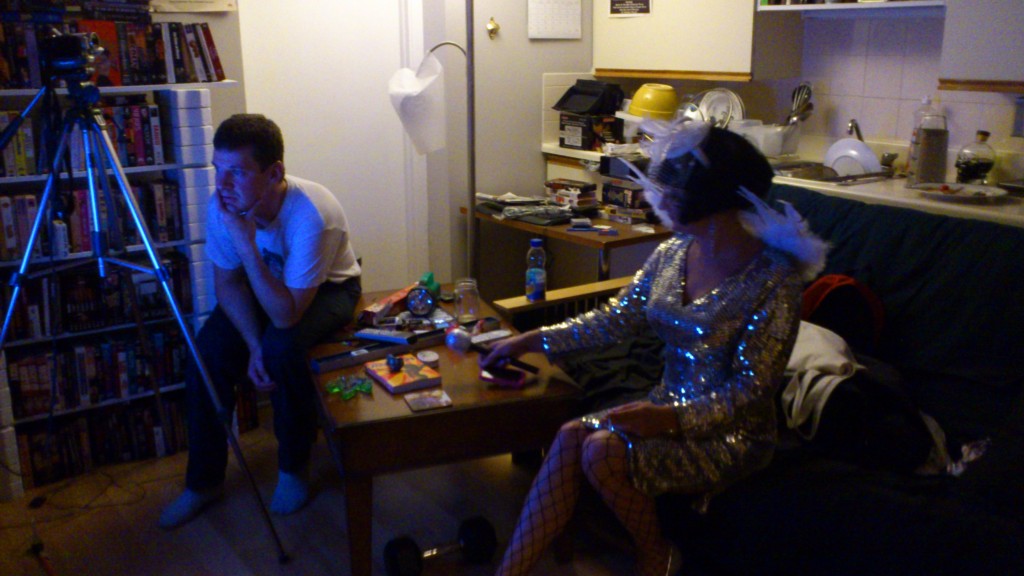 Click here for a complete listen to the Hayter Street Soundtrack.

Out In The Streets Films